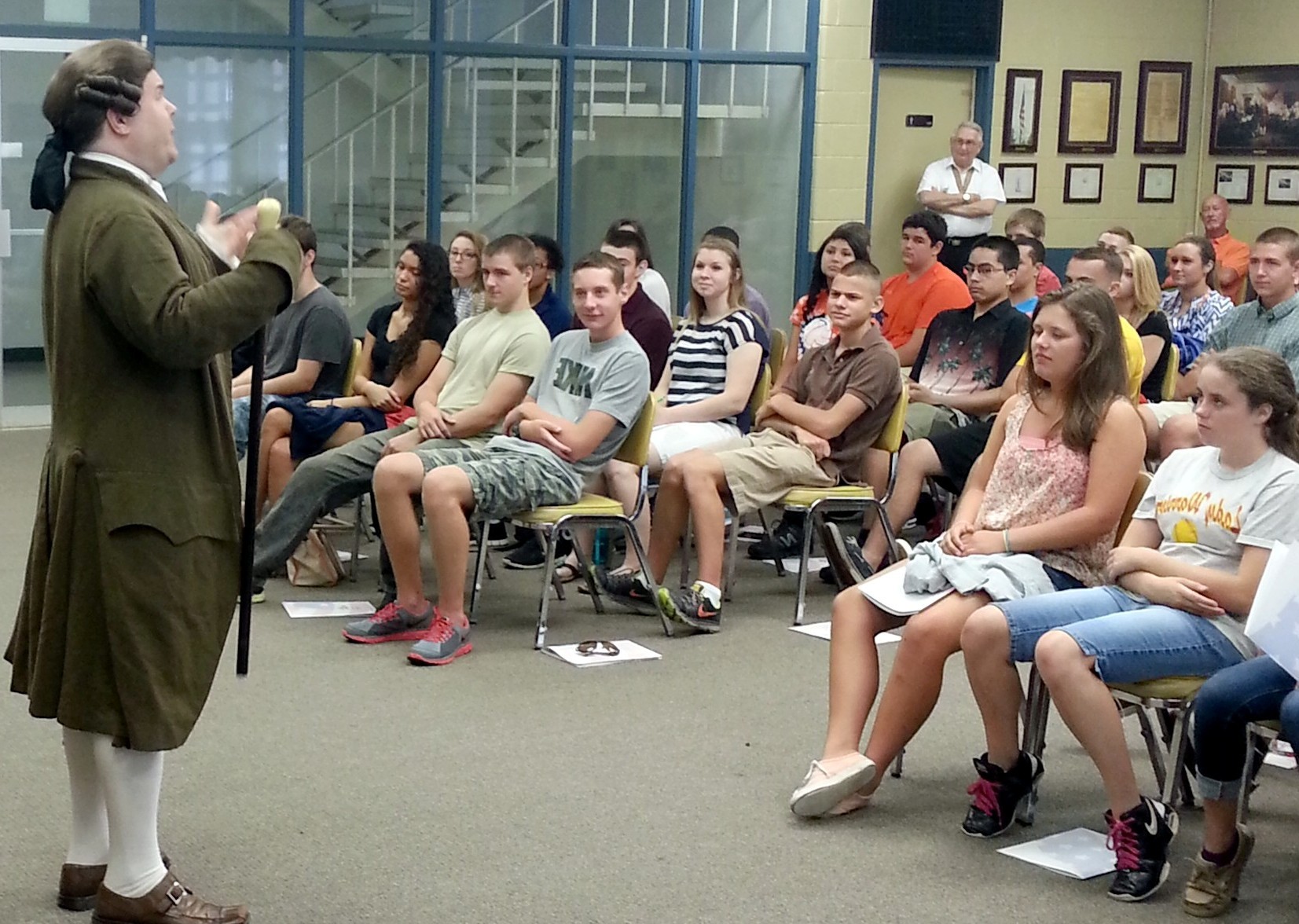 Some days it's hard to make sure students are ​awake​, much less learning.

Wake them up with an icon right from their studies.

Bring a living, breathing, question-answering John Adams or Theodore Roosevelt to your campus or auditorium to discuss those more complicated points of history in human terms. From the American Revolution to World War One, the Eighteenth ​through ​Twentieth ​Century can be discussed  from the viewpoint of real people who lived them.

​​​Students are directly engaged through audience participation, interactive polls, and question-and-answer sessions. Take history to the next level with a Historic Experience.

​Enlist a former President of the United States.

Second President of the United States.  The Colossus of Independence.

26th President of the United States.  The Progressive Powerhouse.

If you're seeking a one-of-a-kind ​visit that exceeds expectations,

you'll get that and more with Adams or Roosevelt.

John Adams not only believed in education, he was a lifelong learner. ​As a Harvard graduate, lawyer, and farmer, his devotion to Independence and the cause of his country led him to serve in the Continental Congress, as the first Ambassador to England, the first Vice President of the United States, and the first President to follow George Washington. ​Adams brings lessons of history, but also of life, learning, compromise, and courage.

Theodore Roosevelt led the nation into the 20th century - at a time of unprecedented inventions and innovations, combined with corrupt business and leadership, and people left by the wayside. "The Bull Moose," the "Trust Buster" indeed spoke softly (sometimes) and carried a big stick (often). But instead of swinging wildly, TR used his voice and his strength well, carrying America boldly into the 20th Century.

​There's a quote from the start of the 20th century -

"Those who cannot remember the past are condemned to repeat it."

Here's a more forward-thinking take on that idea -

​Those who ​are ​inspired by the past - ​forge a path to a brighter future.

​These icons of history are also ​human beings who took the responsibility and effort to make a difference - not only for themselves, but for generations to come. Their determination, character, and ​decisions can impact you and your company - even centuries later.

You get ​More than a Speech -

​​​Get to know the person behind the American mythos - hard working individuals in extraordinary times, ​facing their (and their country's) fears and doubts while making the tough decisions.

​Adams and Roosevelt don't just talk ​at ​your students - they talk ​with ​them. Q&A sessions, voting on issues, interacting with volunteers - these moments are woven into programming to keep your group engaged throughout.​​​​​​

​Tailored to suit your ​educational goals, we'll ​coordinate with you before ​our ​​ President speaks - so that we reach your students in ways that speak to their age levels and your curriculum criteria.

​Our Presidents will meet you and your students as you are - wherever you are.

​​Adams or Roosevelt can travel directly to your site.

Need a more "remote" gathering? Our historic icons can work with21st century technology like Zoom to connect with you across the miles AND the years. 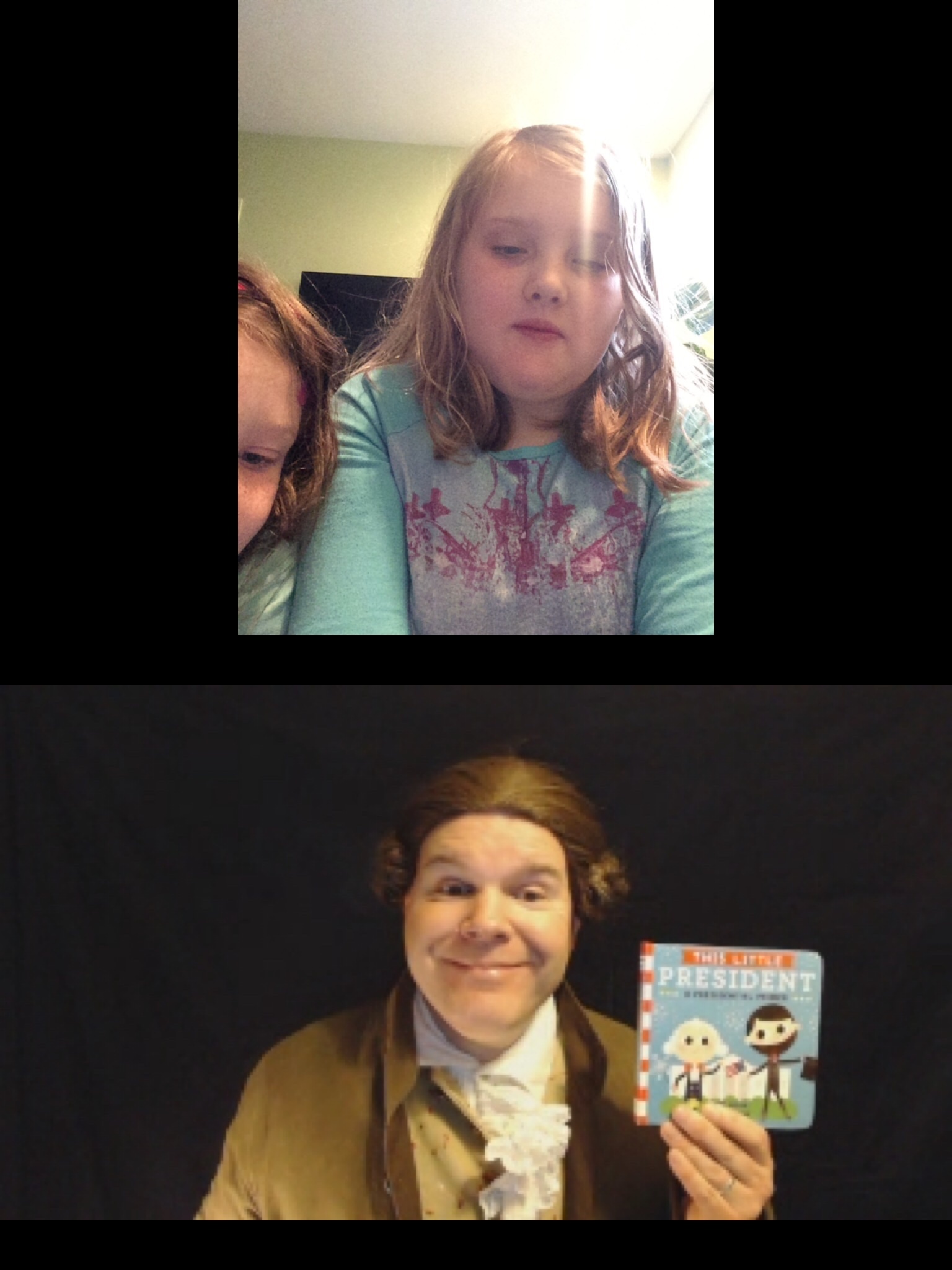 ​Younger students ​take a journey to the Declaration of Independence through Adams’ early days in Massachusetts, as a boy, a lawyer and a revolutionary. Travel to Philadelphia and experience the challenges of the Continental Congress and the fight for our liberties.

From the telegraph to the telephone, carriages to automobiles, Teddy Roosevelt saw lots of exciting changes - and lots of things that needed to change. Learn from the "Trust Buster" about monopolies and the struggle to save America's natural wonders like the Grand Canyon. 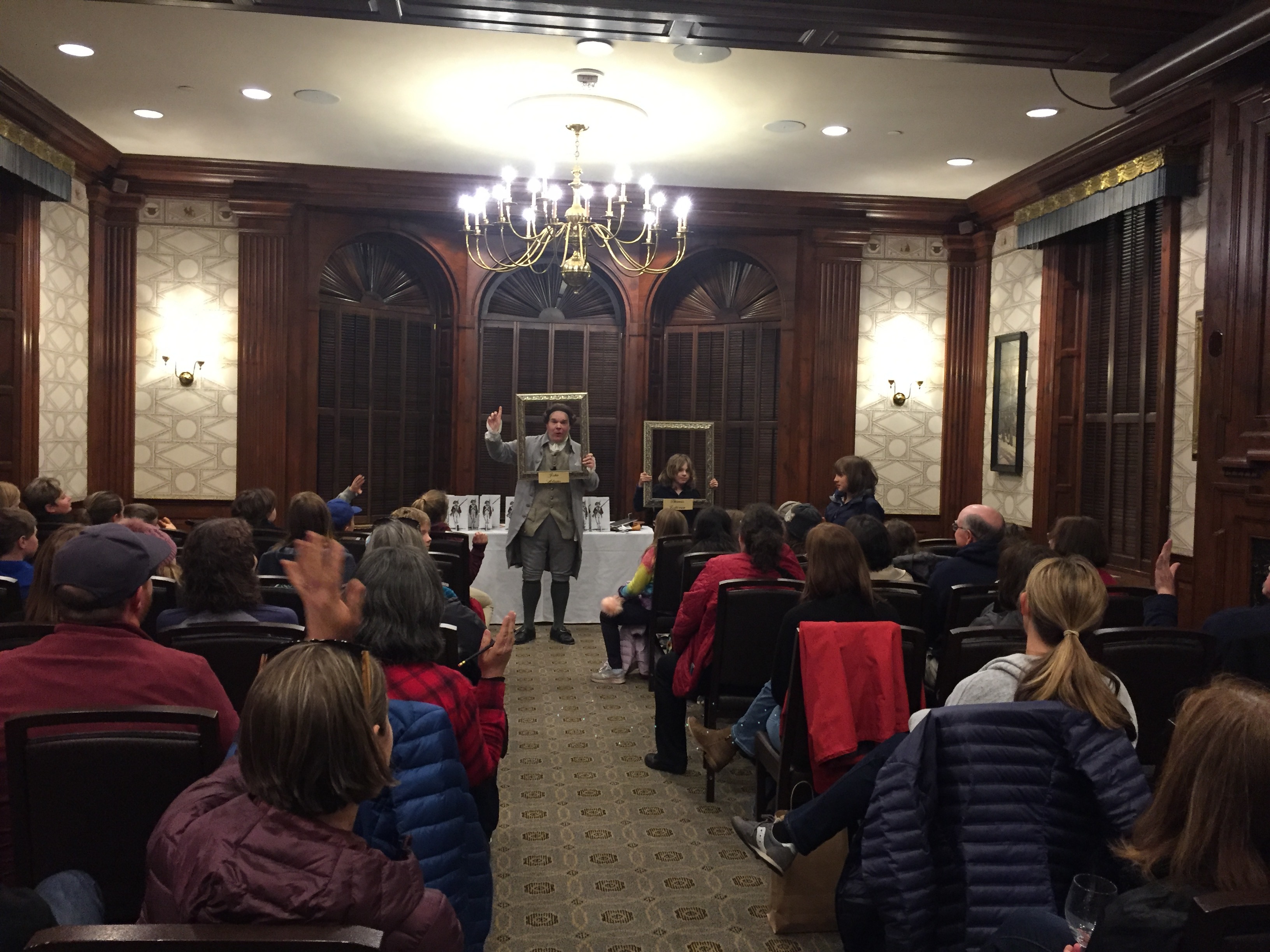 John Adams - ​First to be Second

​Explore the early days of America as a self-governing country with the first man to hold the Second Office, the Vice Presidency. Adams speaks with the "Committee of the Whole," on the unprecedented difficulties of creating a new nation, and why Washington, Jefferson, and Hamilton were not as perfect as he thought history would remember them.

​​​Delve deeper into the issues facing TR and America from the nineteenth into the twentieth century. From the Civil War to World War One, Theodore Roosevelt not only witnessed history - he shaped it!

​For ​UNDERGRADUATE and Graduate Level

The Colossus of Independence faced opposition from friends and rivals, and his efforts for his country's good were not without opposition. Dive deeper with one of the most blunt Founding Fathers on the challenges of Independence, slavery, creating and keeping a nation, and the ​​​First Amendment vs. the Alien and Sedition Acts.

​Theodore Roosevelt - Such a Bully Pulpit!

​​Taking on a new century in a country still swimming in last century's problems - that's no small task. Explore the challenges of timeless and relevant issues - overcoming adversity, crossing party lines, leadership through adversity, friendship against politics - against the backdrop of conservation, monopolies, and the Progressive Party of 1912.​​​ 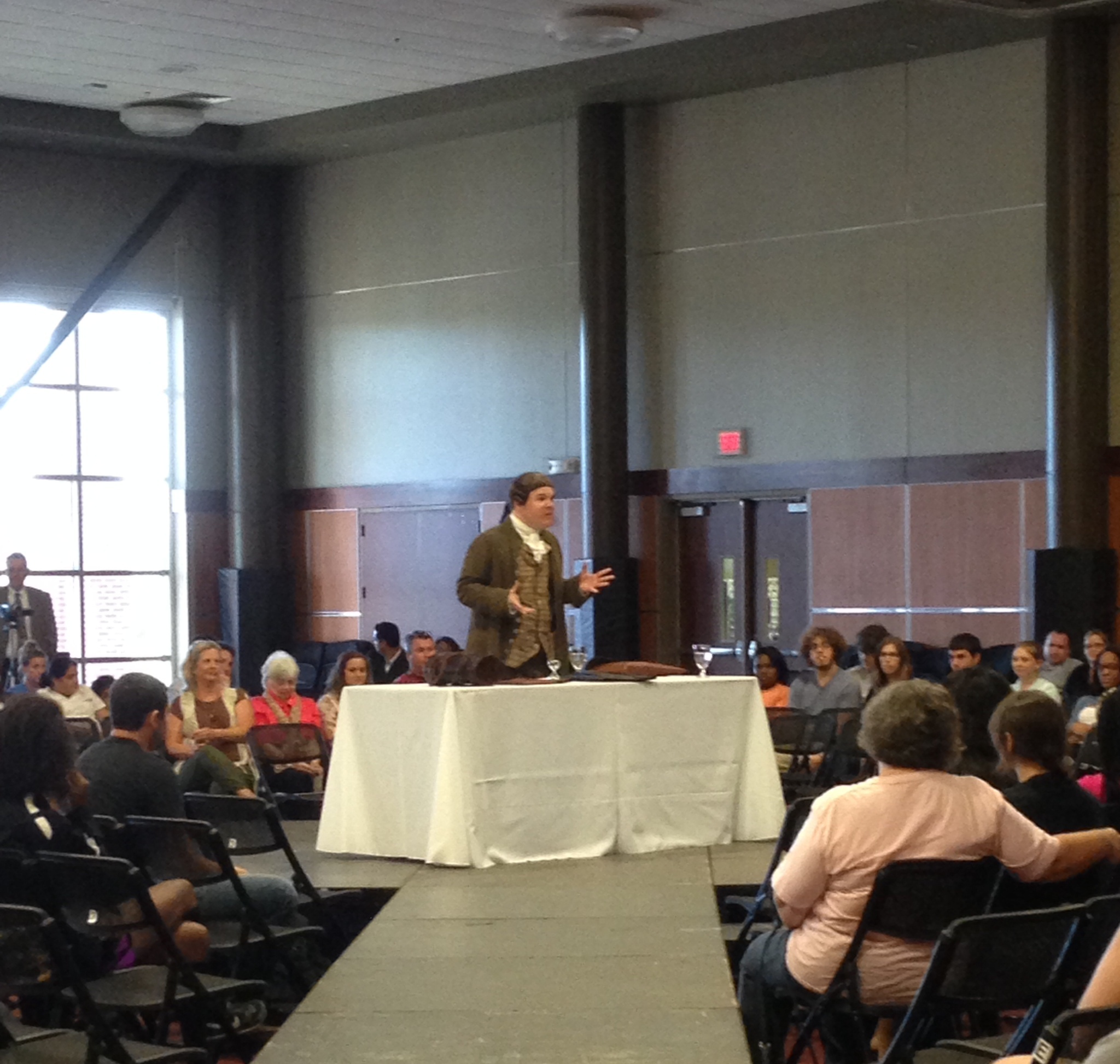 ​​Adams ensured education was preserved when he wrote the Massachusetts Constitution. And his life was a continual pursuit of learning, and defending the facts. From his defense of British soldiers of the "Boston Massacre" to his signing the Sedition Law of 1798, this complicated man knew when to serve, when to compromise, and when to let others lead.

Theodore Roosevelt - ​In the Arena

​​​​TR was devoted to learning - an author of over 40 books,  voracious reader, not to mention a father of six! - he took on the challenging issues head-on, striving to make a difference for the people. That's not an easy task when facing decades-old corruption and resistance to change. But determined to protect millions of people and millions of acres of land, Roosevelt knew when to cross party lines, and when to speak softly and carry a big stick. 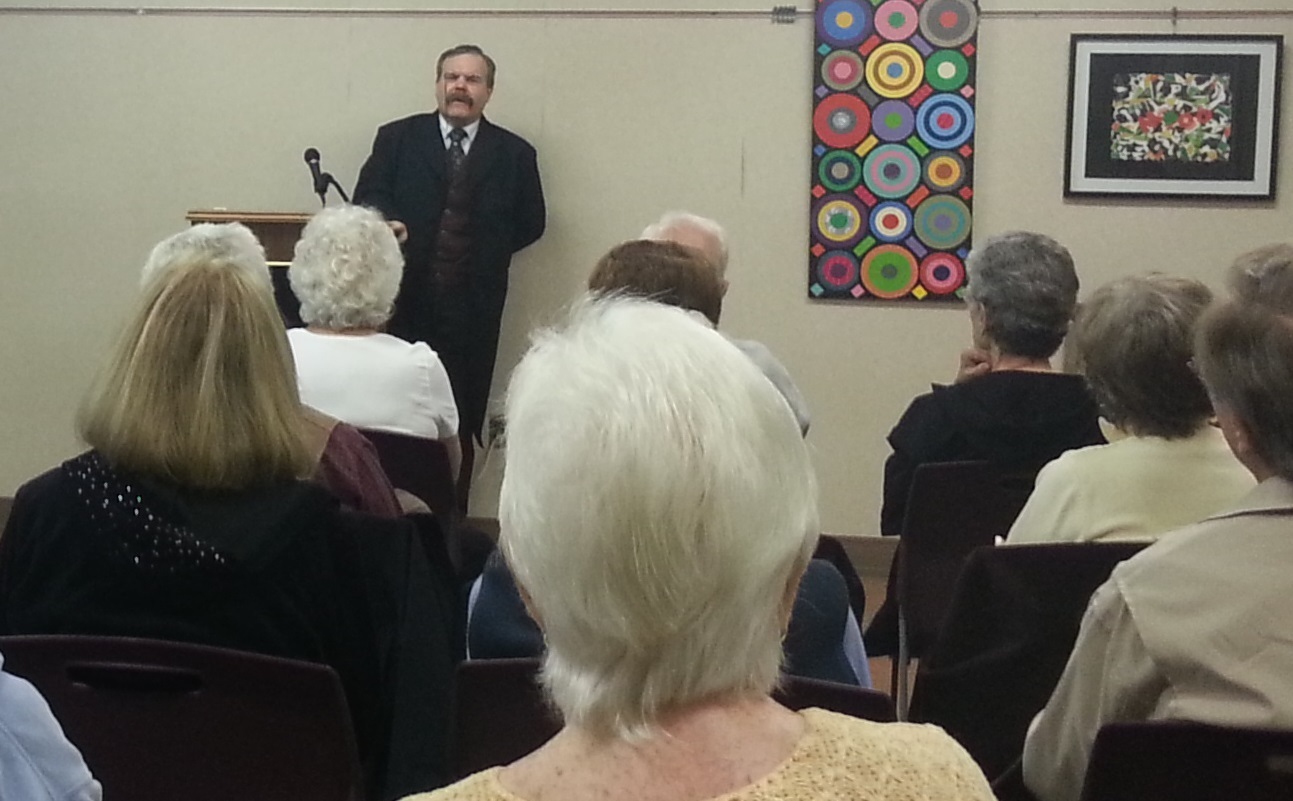 ​I Want a Historic Experience!

Your presentation was outstanding. You kept the students' interest the entire time and secured their engagement in your presentations on such difficult subjects as monopolies and social spending/economics. Your props and movement made it easy, even for the younger ones, to really pay
attention...The student questions were good and your comments and answers resonated with them. They were invested in listening to you not only
because they may have inherently found the subject matter interesting, but also because you reached out to them and urged them to get involved in their world and in their surroundings. I was particularly impressed in how you showed them the tyranny of trusts! You clearly respect the intelligence of young and older learners!

​Huntington, WV Society of the National Society of Colonial Dames of America

“Wonderful – really made the history of these people come alive. I feel like I have an inside view now. Would Love to have them come to my classroom.”

“Great – gave new perspectives on familiar ideas. I got great ideas to use in my classroom.”

This teacher workshop was very successful and your presentation was a significant factor in that success.

​Click the button below to ​schedule your free ​consultation.

We'll discuss your upcoming ​assembly, series or other event, and see if we can make history forge your future.

It'd be a privilege and a pleasure to help you create - a HISTORIC EXPERIENCE.