Theodore Roosevelt was a man of action. But sometimes his actions were quiet and controlled, but still powerful. Like today in 1903, when he saved thousands of birds from his office.

Populations of many species of animals, birds, and fish were on the decline. The further that America tamed the frontier, the more dead animals were found in their wake. TR saw this firsthand when he went hunting for buffalo – the American bison that once crowded the plains were impossible to find. It took ten days before he found one.

And while Roosevelt loved to hunt, he believed in sportsmanlike hunting; he thought hunting could be used to control wildlife populations, but should never mindlessly destroy entire species.

And unscrupulous hunting was on the rise, particularly of birds. The fashion trends were leaning toward plumage for ladies’ hats. The more elaborate the better. And some hats – got elaborate.

One of the bigger problems was that the more bright and beautiful feathers came from brooding birds – mothers nesting with their eggs. So hunters would find more secluded islands like Pelican Island – filled not only with brown pelicans (one of Roosevelt’s favorites) but also osprey, egrets, ibis, spoonbills and more – and take down birds by the hundreds. And eggs would be left uncared for – further reducing bird populations.

Conservation groups like the Audubon Society were calling for an end to these feathered hats. They even tried to introduce their own feather-free alternative: Audubonnets. I kid you not.

As you might guess, they weren’t winning the feather war. People in general were not aware of the damage they were inflicting on the wildlife populace; they thought there was an endless supply of birds to pluck. Yet numerous bird species were facing extinction; Good Housekeeping reported in 1886 that "At Cape Cod, 40,000 terns have been killed in one season by a single agent of the hat trade."

But Frank Chapman, an ornithologist and curator for the American Museum of Natural History had an ace up his sleeve.

He knew a President.

Theodore Roosevelt had already shown his interest in conservation; even as governor of New York he had pushed for milliners to stop using bird plumage in their hats. Chapman, who had visited Pelican Island and seen its plight, got word to the President about the peril of its nesting birds. And in one of his simplest, most unassuming moments as President, Roosevelt asked, “Is there any law that will prevent me from declaring Pelican Island a Federal Bird Reservation? [There wasn’t.] Very well then, I so declare it.”

And thus an island was saved, along with thousands of birds. Of course it took time and much more effort to stop poachers and change minds. But TR saw a need, and a chance to make a difference, and he took it.

And generations of birds received the benefit. And so do we. 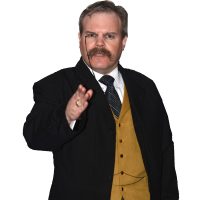 ​Birds that are useless for the table and not harmful to the farm should always be preserved; and the more beautiful they are, the more carefully they should be preserved. They look a great deal better in the swamps and on the beaches and among the trees than they do on hats.